What’s been happening at Robin Rigg? An update

Posted on February 22, 2016 by solwayshorewalker

The distant wind-turbines of Robin Rigg, seen from the Allonby shore

Live shipping maps – watching vessels move around the seaways in real-time – can become addictive. I can easily be distracted by Danny Ferris’s Solway Shipping website with its live coverage, photos and notices of the ships that are due into the ports of Workington and Silloth.
During the past months there have been plenty of opportunities to be distracted, with considerable activity around E.ON’s Robin Rigg Wind Farm in the Solway, including much coming and going of E.ON’s own boats, Solway Spirit and Solway Challenger, and several other twin-hulled boats belonging to Turbine Transfers. There was also the unmissable presence of the massive jack-up barge MPI Adventure.

I first wrote about Robin Rigg in 2011, a year after it came into full operation, and I also spent several very amusing hours with the crews of the two service boats, Solway Spirit and Windcat 3.

Since then, there have been several changes. Tim Morgan became Plant Manager for Robin Rigg in 2013; a former materials engineer, he tells me he has ‘been in wind’ since 2004, both onshore and offshore. He kindly agreed to give me an update on Robin Rigg – especially since I assured him that I think the offshore windfarm is (unlike the piecemeal onshore scatterings of turbines) a handsome and efficient addition to the Firth. There are several important changes he’d like to tell me about, and I have several questions to ask. Our conversation at E.ON’s building at the Port of Workington is relaxed and informative – within the bounds of what he is permitted to discuss (as with my previous articles about Robin Rigg, I knew boundaries would exist and respect them.)

Offshore Maintenance teams
The Danish firm Vestas built and supplied the turbines, but Tim tells me that when their five-year maintenance contract came to an end in December 2014, E.ON decided to bring the whole offshore maintenance team in-house from January 2015, creating 12 permanent jobs for local people. ‘The in-house approach is working really well,’ he said, ‘and we’re becoming a close-knit team.’

Specialist teams have also had to be hired in the short term to do a ‘health check’ on the turbine blades, and subsequently some repainting and minor repairs; the work involved a special expertise, abseiling and rope-work high above the sea.

Rope-access worker: out on a limb 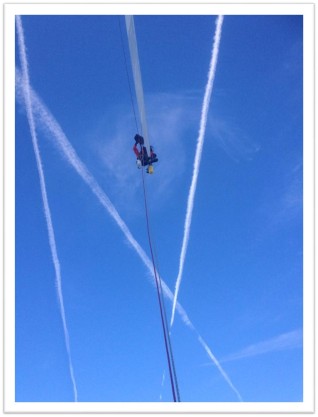 (Photos with permission from Alpha Offshore)

The service vessels have also been busy, due to around 40 maintenance staff working over the last 18 months, on an industry-wide issue with grouting inside the foundations.

So, what is grouting?

The structure and construction of an offshore turbine is described in more detail on Solway Shore Stories, but basically the monopile base is hammered into the sea-bed; then a cylindrical Transition Piece (TP) is lowered onto the monopile and levelled. The 80-metre tower is bolted to the TP, and eventually the nacelle, blades, generators and so on, are installed at the top of the tower.
The TP is like a collar over the top of the monopile, and it is fixed in place by a special sort of cement-like substance, the grout; the grout is thus essentially a loaded component, carrying the weight of the turbine. 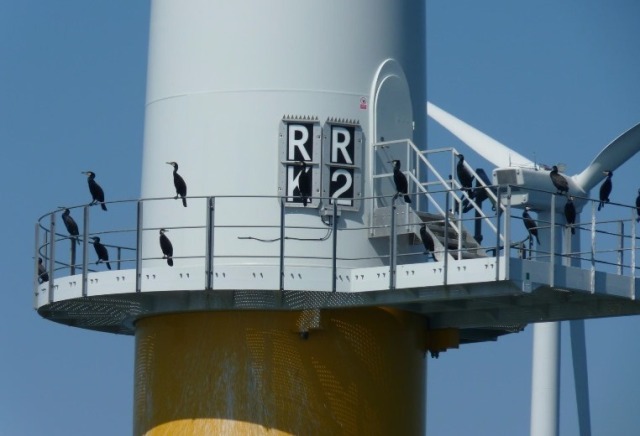 The tower sits on the (yellow) TP – and the turbines offer a perch for increasing numbers of cormorants (photo with thanks to E.ON)

Tim explains that the ‘remediation work’ to safeguard the site against any longer term problems was estimated to take around two years’ work; it is well under way and can be carried out inside each turbine foundation (a surprisingly large space, 4.5 metres in diameter).

A decision to find where the responsibility for the incorrect ‘design code’ lies is ongoing. In April 2014, MT Hojgaard (MTH), the company responsible for undertaking the grouting work, was taken to the High Court by E.ON and found liable for damages.
MTH appealed the decision at the Court of Appeal in April 2015, arguing that it had ‘observed the applicable international standard as required by the client’ – and won: it was ruled to be not liable for the remediation costs.
In November 2015 E.ON took the case to the highest legal authority, the UK Supreme Court – and has recently been granted the right to appeal.

The maintenance technicians, rope-access teams and others are ferried between the wind farm and the Port of Workington by the service boats. E.ON commissioned their second vessel in October 2013; one of the pupils at Northside Primary School in Workington won a competition to choose the name, the Solway Challenger, and the vessel was blessed and named at a special ceremony at the Port. Solway Challenger is a twin-hulled, 19-metre vessel, and with her twin-deck wheelhouse is “very comfortable and spacious”, Tim assures me. 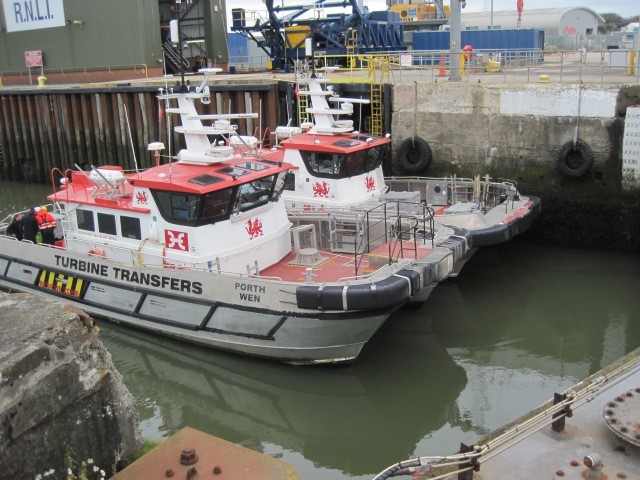 Windcat3 is no longer on site, but other Operations and Maintenance (O&M) vessels are contracted to E.ON on a varying time-scale. Turbine Transfers has had several vessels working in the area, such as Port Wen, Rhoscolyn Head, Porth Diana, Aberdaron and Lynas Point (you might have guessed that it’s a company based in Wales). The grey twin-hulls are especially designed to enable them (like Windcat before them) to nose up to a turbine and allow people and kit to be transferred despite the swell. O&M is keeping crews and vessels busy.

The jack-up vessel, MPI Adventure (a newer design than MPI Resolution which put the monopiles in place) steamed onto the scene on October 2nd 2015. She is contracted to E.ON, and Tim says she arrived following work on a project in the German North Sea. The Solway’s weather was very changeable and often wild during the autumn and “although Adventure’s stable when the legs are down, you can’t be using cranes and so on in high winds”– so whenever the wind got up, Adventure paused or headed back to Belfast until the working window of the next Neap tide.

I watched from the Senhouse Roman Museum at Maryport in November on one occasion when she returned, and she was an imposing sight, travelling fast for such a giant. 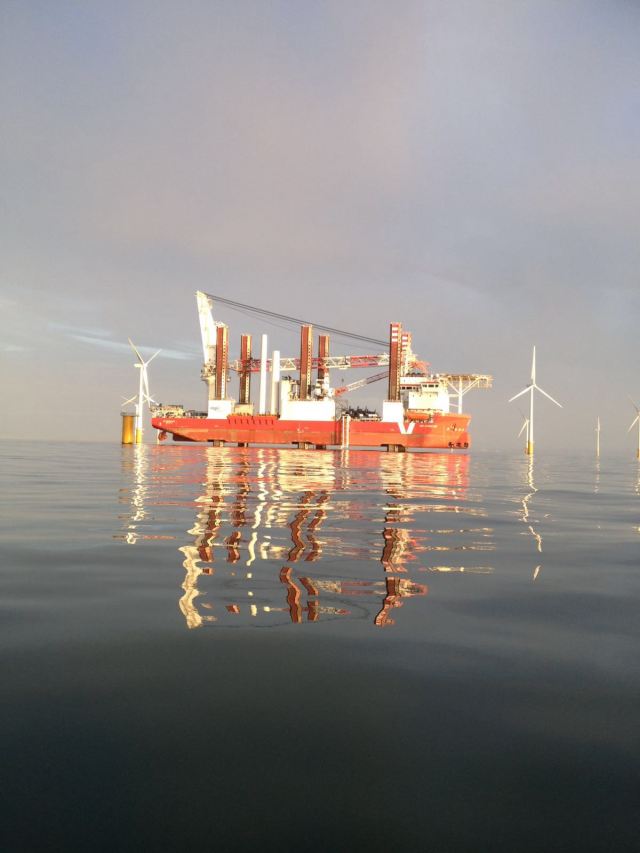 MPI Adventure at Robin Rigg (partly removed turbine to the left). My thanks to Eddie Studholme for this fine photo.

Why was she at Robin Rigg? To decommission  two of the turbines, A1 and B1: in other words, to take them down. Tim explained, “After the storms of winter 2013/14 there was an effect on the channel causing it to move. We made a proactive decision to take out the two turbines after monitoring the movement of the sandbank and loss of seabed.”

Generation by these two turbines was halted back in April 2015; they were dismantled in October. There is no impact on the remaining turbines at the wind farm.

I’ve written elsewhere about Natural Power’s drop-down video survey of the monopiles, and the clusters of mussels, brittlestars, sea-anemones that have found a foothold on their surfaces, on some of the few places in the Firth where there is a firm substratum.

Offshore wind farms provide discrete artificial reefs, a specialist niche which might also be supposed to provide food and shelter for some species of fish.

It was interesting, therefore, to hear that one of the monopiles removed by MPI Adventure was encrusted with organisms; the photo shows what an astonishing biomass of marine organisms have attached and grown on the base of the turbine, forming a dense and interconnected ecosystem.

A turbine base removed from the sea, densely encrusted with marine organisms (I’m grateful to E.ON for this photo)

The Solway Firth is “raw and beautiful” according to Tim Morgan; he also called it “chaotic and unpredictable.” Colin Sharpe, Development Manager at the Port of Workington calls it “one of the most aggressive estuaries in the UK.” Marine biologists at Natural Power refer to the Solway as a ‘highly dynamic estuarine environment.’

It is infamous for its shifting sands and channels, its changing bathymetry and sedimentation. In the region of the wind farm, the seabed is in fact a series of banks (Dumroof Bank, Robin Rigg, Two Feet Bank and Three Fathoms Bank) orientated in a northeast – southwest direction. Here, according to a bathymetric survey (see section 5.2 for Robin Rigg) there are ‘finer grained granular sediments … ranging from laminated sands, silts and clays to organic silts and clays.’ Across the whole of the turbine array area sediments ‘generally comprise mobile, shelly fine to medium grained sands’.

When Natural Power ecologists Jane Lancaster and Fraser Malcolm carried out surveys of fish and benthic invertebrate fauna during the pre-construction, construction and operational periods, their ‘baseline survey sampling locations were selected, through consultation with local fishermen, to maximise catch by following the channels adjacent to the sand banks within the study area. Subsequent surveys during the Construction and Operational periods were conducted at the same survey locations in accordance with the MEMP [Marine Environmental Monitoring Programme]. However, as the Solway Firth is a mobile sand bank system influenced by tidal currents, the original sandbanks surveyed in 2001 had shifted by the commencement of the construction period surveys.’[1]

I see the offshore wind farm as a compact and coherent way to harness the wind’s power, one of the forms of ‘renewables’ that we must have in the UK’s portfolio. That 60 wind-turbines and two transformer stations could be built in the adverse conditions that are so much a part of the Solway’s ‘character’ is a major triumph of engineering and persistence. And while many people might enjoy the schadenfreude of perceived difficulties with the windfarm, that ‘I told you so’ moment, there are good things to report. Last year, according to their newsletter Round Robin, ‘Turbine availability reached over 97% during this time, which is an industry leading performance level’

However, with regard to the difficult environment that the Firth presents, the proposers and architects of other forms of renewable energy related to the Firth should pause in their rush to create over-large schemes, and consider very carefully what the Solway can throw at them: and then design accordingly.

Note: I met with Tim Morgan in November 2015, and he submitted my draft blog-post to E.ON’s communications and legal teams in early December 2015 for consultation and approval. I received this, their edited (and sixth) version, on February 19th 2016 – hence the delay in its publication.