Posted on July 7, 2014 by solwayshorewalker

Puzzling about the link to Solway Shore-walker? It is the dog-whelk Nucella lapillus, the ‘boring mollusc’ of an earlier blog-post.
On page 182 of Natural History: The Mollusca, published in 1854, Philip Henry Gosse writes: ‘From Mr Stevenson’s interesting account of the erection of the Bell-Rock Lighthouse, we learn that the valves of the Mussel are no defence against the Dog-Winkle. “When the workmen,” says this gentleman, “first landed upon the Bell-Rock, limpets of a very large size were common, but were soon picked up for bait. As the limpets disappeared, we endeavoured to plant a colony of mussels from beds at the mouth of the river Eden … These mussels were likely to have been useful to the workmen, and might also have been especially so to the light-keepers, the future inhabitants of the rock, to whom that delicious fish would have afforded a fresh meal … but the mussels were soon observed to open and die in large numbers.” 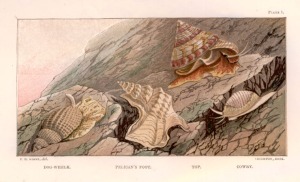 Nucella on the left: from PH Gosse’s ‘A year at the shore’

And soon, says Stevenson,”the Buccinum lapillus [Purpura] having greatly increased, it was ascertained that it had proved a successful enemy to the mussel. The Buccinum being furnished with a proboscis capable of boring, was observed to perforate a small hole in the shell … and to suck out the finer parts of the body of the mussel.”
Gosse refers to the boring apparatus as a ‘drilling wimble’, a type of auger.

The river Eden that Stevenson mentions is not (unfortunately for Solway Shore-walker) the one which empties into the Solway, but the Scottish river which reaches the east coast near St Andrew’s, and is therefore rather closer to Bell Rock. Stevenson’s team finished building Bell Rock lighthouse in 1811.

The lighthouse was automated, or de-manned, in 1988. Eddie Dishon, a lighthouse-keeper’s son, was involved in the decommissioning – you can read his story, and see photographic evidence of an unusual Easter-time event at the lighthouse, in my collection of stories about the lives of some members of the Lothian Birth Cohorts,  LBC Lifetimes, online; Eddie was too high up to see any Nucella.

‘The Tyrian purple, the most celebrated manufacture of that famous crowning city whose merchants were princes, was the juice of a shell-fish.’ There, it was derived mainly from a species of Murex, a gastropod Mollusc.
But Gosse thought that Purpura lapillus [Nucella] might provide the dye too. ‘I have myself been entertained with making experiments on the purple dye of this shell-fish, which, perhaps, some of my readers might like to imitate. …. break the shells with a blow of the hammer, taking care not to crush the animals: throw them into a basin of fresh water, in which they will die in a few minutes. Examining them now, you will find just behind the head, under the over-lapping edge of the mantle, a thick vein of yellowish white hue, filled with a substance resembling cream: this is the dye in question.’
Then, ‘with a camel’s-hair pencil you may paint upon linen or cotton cloth any lines, the initials of your name, for example.’
Sunshine is now required. ‘Place your linen in the light of the sun … and watch its changes. The marks [pass] from yellow to pea-green, and are now of a full grass-green … the yellow element disappearing and the blue element becoming more and more prominent … the colour at length appears a full indigo.’ And eventually, ‘the hue is a dull, reddish-purple.’

Gosse was a great shore-walker, collector, and the first to run shore-classes; there is much more about his life, seen through the eyes of Anne Church (who sent Gosse specimens of sea-anemones, and whom I have fictionalised) in my novel Seaside Pleasures.

This entry was posted in shells and tagged dog-whelks, Gosse, lighthouse, Seaside Pleasures, Tyrean Purple dye. Bookmark the permalink.
%d bloggers like this: